We’ve been back for a few hours and I’ve been trying to catch up on a few non-exchange related things but figured I should get back into the habit of updating. Our weekend was awesome, if short. I ended up having a ridiculous day on Friday and working way later and on many more things than planned but eventually we were off. We had decided to stay in Friday night because of getting to town late and the frigid temps. There was a bar, Potter’s, in our hotel and since it was in possession of a good beer list we were of course happy. Kris had a Daisy Cutter and a chocolate bourbon stout. I had a glass of prosecco. The chocolate bourbon stout was gross. Tom had Coke. To always has Coke. Unless the place serves Pepsi. We were all hungry and ended up with Kris getting a lobster roll (not what I think of when I think of Chicago), Tom getting a very expensive microwave pizza (Gotta love hotel bars) and me getting an overpriced but okay cheese plate.

On Saturday we were pretty lazy and then ended up heading to Wildberry for a fantastic breakfast. It was well worth the hour wait. I swear our exchange student’s think all we do is eat but we love to take them out for ridiculous American eating experiences. Wildberry has an amazing selection of breakfast foods including Kris’ red velvet french toast (it’s red velvet cake prepared like french toast with cream cheese frosting in between the three layers). I had a breakfast panini which was freaking amazing (ciabatta, roasted tomatoes, havarti, basil, eggs medium), and Tom loved every bit of his chocolate chip pancakes. After that we headed to the Bank Of America Theatre were we saw Chicago. It. Was. Fantastic. The three of us enjoyed the upgrade I got to the VIP Suite (open bar for Kris and I, private bathroom, coat check) but the best part of the afternoon was, of course, seeing John O’Hurley on the stage. After the play Tom and I spent some quality time reading while Kris went and had a few beers down the street. Last night we had dinner reservations at Vermilion which is seriously my favorite restaurant in Chicago – Indian Latin Fusion… mmmmmmm.

This morning we got on the road, the very slippery road, and headed back to Ann Arbor. A brilliant weekend and weird to think Tom’s last time in Chicago! 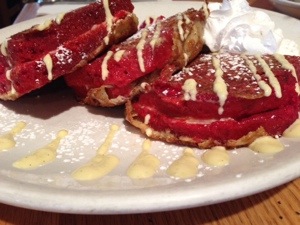 2 thoughts on “Chicago In Chicago”