I cannot take any credit for this concept other than that we have a similar one with the kids which is, “Try Everything. TWICE!” Instead, I will defer to the lovely Cara Thomas, whom I’ve known for nearly two decades and who never fails to amaze me with her ability to embrace life to its fullest.

Cara took a sabbatical from work a while back and embarked on a true adventure, exploring yoga, cultures, cuisine and herself. Rather than just go, she framed everything around the idea of saying yes and created a fantastic blog, Yes To Excess. Cara asked her friends, via social networking sites, to each write a challenge which another friend designed creatively. Each was placed in an envelope and Cara opened them as she experienced her life on sabbatical, sharing stories of how the challenges brought new wisdom and knowledge to her already rich journey.

I can only hope that our kids are half as willing to embrace new things, new people, new food, and everything else new as they embark on their year with us and hope that some of you will also draw inspiration both from the kids we host and Cara’s philosophy. 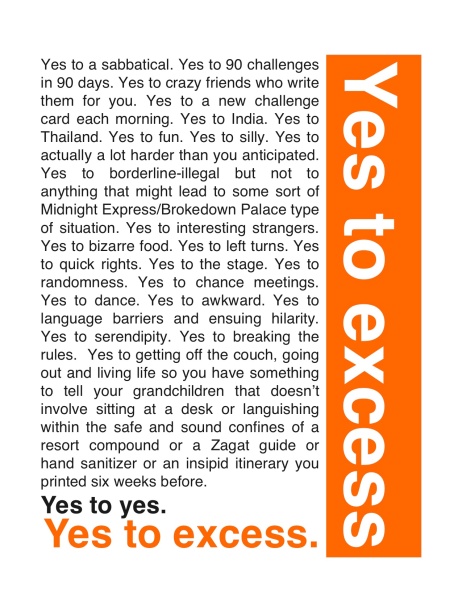 .
How will YOU say yes during your year of hosting (or being hosted)??

One thought on “Say Yes!”